Raskelf  used a Review to improve sales growth in Germany.

The story for Raskelf really starts in early 2005, when Raskelf portable memory foam toppers were combined with a shaped duvet to create the Duvalay™. This luxurious portable sleeping solution was the idea of Liz and Alan Colleran, who, after years of uncomfortable caravanning had finally created the perfect solution to a good night’s sleep away from home. At the time of the review, sales were far exceeding Liz and Alan’s expectations, and the company had 10 employees.

With the worst recession in decades though, they had to make a conscious decision to look beyond the UK to sell their product and minimise risks. So, in 2009 they made the decision to test the water in the Netherlands. Chosen because of its proximity to the UK, and the thriving caravan market a small operation was set up with an agent to promote the Duvalay™ to the 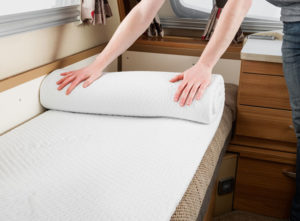 Things were not easy in the beginning however, and Liz explained
that finding the right people to work with was difficult. They needed someone who spoke English, who had somewhere to accommodate the stock, a forklift truck to load it and ideally someone who did not deliver other, competing products as the business was still growing. In addition, despite being so close to the UK, mail order was the only mode of sale because telephone card payments were not permitted to a UK bank account.

A degree of scepticism about business support services, after previous experiences delayed Liz and Alan’s decision to utilise support from UKTI. However once they did, they were able to really benefit from the expertise provided by the Passport to Export programme. Their websites and networks were boosted thanks to workshops on IT including the advantages of using social networking for example. The programme also made sure that the team at Raskelf were pointed in the direction of people who had skills to help them. The Export Communications Review, carried out by specialist Mary Cousins is a case in point. Liz describes Mary as “the sharpest cookie I’ve ever met”. The review gave detailed recommendations covering languages, localisation, colour and content of both the website and the Duvalay™ packaging.  Also as a result of the Review, a virtual telephone number was set up in Dusseldorf. Enquiries from Germany increased by 100% after this number was advertised.

Our International Trade Adviser, Steve Haynes, was really supportive, initially guiding us through each step towards successful exporting. They pointed out the courses that were available and pertinent to our situation and tried to ensure that even though we were generally very busy we got as much from the programme as we possibly could.”

As a result of the support offered through UKTI’s Passport to Export programme, Liz is looking forward to seeing the percentage increase in sales next Spring. Raskelf is no longer relying on advertising, but with separate website for the Duvalay™ in the Netherlands, Germany and of course the UK they are confident that their “quirky English product” will continue to be a hit in Europe.

Our consultants have been delivering Reviews since 1996.  Here below are a few case studies that illustrate the … END_OF_DOCUMENT_TOKEN_TO_BE_REPLACED