Based in Stourbridge and employing 21 people, Cox & Plant Products Ltd is a family-owned business that manufactures conveying systems for major processing plants.  Its vibratory conveying systems, which make handling the product easier and ensure minimum downtime, have helped to establish the firm as a respected supplier t 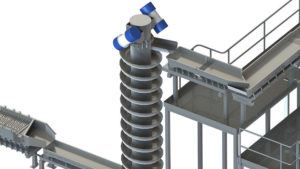 o the food and pharmaceuticals industries.  By the beginning of 2010, Cox & Plant had also enjoyed some export success and Managing Director Andy Cox was keen to push the firm further into overseas markets: “At that time, around 30% of our turnover came from export, and we felt there was scope for us to create/realise further significant revenue opportunities. As we entered 2010, that was one of our top priorities.”

In particular, Andy was frustrated by a lack of enquiries from overseas: “The vast majority of our overseas business had come from proactive efforts on our part, for instance by approaching existing clients’ overseas operations. The fact that we saw so few enquiries from overseas suggested our marketing materials, particularly the website, were failing to explain our proposition to export customers.” In consultation with Maggie Neale, an International Trade Advisor, Andy decided that this issue should be addressed as a priority, before embarking on a proactive strategy for international expansion.

He said: “Working with Maggie, we decided to focus on markets where we already had a presence, like France and Germany, but also seek to expand into Spain and Poland. At the same time, we saw the website as a critical tool with which to reach customers further afield. Getting the website right was obviously crucial to all those plans.”

Acting on Maggie’s advice, Cox & Plant signed up for an Export Communications Review (now called the International Communications Review), delivered by Doug Lawrence.  Doug looked at every aspect of the company’s overseas marketing and communications, but focused in particular on its website.  Following a detailed process of review and discussion, Andy was provided with a comprehensive report. It set out Cox & Plant’s strengths and weaknesses, and provided a range of clear, low-cost recommendations designed to quickly improve the company’s communication with potential export customers.

Andy was very impressed with the advice and support he received from Doug, via the ECR: “Doug is an inspirational consultant, hugely experienced and with a wealth of knowledge. Working with him provided me with some invaluable insight and ideas. In fact, a lot of the changes we have made since the review have been about simplifying the way we describe our business and products. Some of the content on our website was just too complicated, but we needed Doug’s independent view to help us see that.”  The first job for Andy, then, was to rework much of the company’s written materials to simplify the language and explain technical terms in a more accessible way. At the same time, he decided to move away from using lots of small images, and instead use fewer, larger and higher quality pictures to bring the firm’s products to life.  He said: “That piece of work has all kinds of knock-on benefits because it made us think again about the things that have become second nature. It has changed the way we talk about the business, as well as the way we write about it. At the same time, simplified writing is far easier to translate effectively.”  This has benefited Cox & Plant in a number of ways, according to Andy: “It has made working with agents easier and also helped us to make far more effective use of our time with overseas business prospects, for instance at trade shows in India and Spain. Importantly, our website has performed much better as an export communications tool too.”

“The real proof of course is in the sales figures, and we haven’t been disappointed. During the final three months of 2010, we brought in revenues equating to eight months of our business plan, a large proportion of which came from export. Based on that, there is every reason to view our future in overseas trade with confidence.”

Our consultants have been delivering Reviews since 1996.  Here below are a few case studies that illustrate the … END_OF_DOCUMENT_TOKEN_TO_BE_REPLACED